Spelet spelas på svenska men regler och text som förekommer i spelet är på engelska. The game will be played primarily in swedish although rules and text that appears in the game will be in english.

A rescue fleet investigates a spaceship that disappeared into a black hole and has now returned... on board are the secrets to save the Earth and unlock the universe beyond.

In the near future, humanity has successfully colonized the Moon and Mars, and is venturing deeper into space. In the year 2040, state of the art starship Event Horizon was sent on a secret mission, but it disappeared without a trace beyond the planet Neptune at the outer rim of the solar system. The official story was that her engines malfunctioned resulting in a loss that was considered the worst space disaster on record, with her entire 36-person crew missing and presumed dead in a cloud of fiery death. The economic ripples of the disaster disrupted the stability on Earth as the blame was passed around. In 2047, just as all-out war is about to erupt, the ship suddenly reappears.

The international space station for the outer planets picked up a heavily distorted distress signal which identified the ship as the lost Event Horizon. Since the ship had all the major Earth players involved, they called on their best vessels in reach of the outer planets to be diverted to take on this UN lead top-secret search and salvage mission. The Earth’s future is at stake. On board the fleet are military personnel, scientists, medical staff, technicians, and high-ranking officers who command each ship. On the Event Horizon, something is waiting for them.

The international search and salvage fleet consists of vessels representing different nations and corporate entities, all pooling together to salvage the starship, uncover its secrets, and compete for faction-specific and individual goals. Each player will take the role of one crew member in the search and salvage fleet and control their actions on board the fleet or exploring the Event Horizon. Each ship has its own distinct characteristics and specialties. Each crew member has been carefully selected with a set of skills needed for salvaging the Event Horizon and getting back to earth. No one plays a trivial role, and no one is expendable.

The game takes its name from one of the horizons surrounding a black hole, a shell of a point of no return – a region in spacetime beyond which future events no longer can be influenced. It will be a race against the clock for the teams to meet their competing objectives as individual crewmembers start to lose their grip on reality.

What Kind of Megagame is it?

Event Horizon is a megagame with lighter board game mechanics and prominent elements of negotiation and roleplaying in a near future, space horror setting. The game is played across two rooms where the first room holds the fleet and the second room holds the Event Horizon. The game has severely restricted communication between rooms, and the claustrophobic setting leaves little room for the “grand scale of things” as each player is ultimately left alone to face what is on the Event Horizon.

You don't need any previous megagame experience to play this game. There are umpires called Control who will help you on the day so you can focus on having fun with the other players.

The game is designed by Johan Olofsson.

The search and salvage fleet has 7 teams. Each team has 5 to 8 players taking on the roles of commanders, captains, engineers, scientists, security staff, and medical staff.

Blackwater One (the corporation that built the Event Horizon) (5 players)

There are a few typical roles to play. These roles have some variations depending on the team they are in.

Commanders and captains are versatile team leaders who will focus on organising the mission on the Event Horizon. They have security clearance for some special actions that no other players can do (at least at the start of the game) like accessing certain security systems. The main focus for these players is to lead their team and make sure you meet your team objectives while collaborating (or at least managing relations) with the other teams and UN command. This is the perfect role if you are a tactician who likes to call the shots.

Engineers are good at technology actions like repairing, operating equipment and using tools. This is the perfect job if you like getting people out of sticky situations (or possibly get them into sticky situations by failing to do your job).

Scientists are good at making sense of the world and putting two and two together - sometimes in a very literal sense. They are specialists at using science equipment and possibly event stuff. This role is perfect for the thinkers who want to unravel the mysteries of the Event Horizon.

Medical professionals range from doctors to psychiatrists specializing in post-traumatic stress, paranoia, and stasis-induced psychosis. That might sound alarming but don't worry. Apart from specialty skills like operating medical equipment, you are also good at patching people up on the fly. This role is the perfect job if you can keep your head cool and that all sounded exciting.

Security are heavies who lift things, knock down doors, have combat training, and know how to operate security systems. These people are the muscle. This is the perfect role if you like getting things done and aren't afraid to get your hands dirty while doing it.

Your character is represented by a miniature. This means that you “are” where the miniature is. This might be very important, so keep track of where your miniature is.

Notes on teams and roles

You start the game planning the day with your team and playing closely together. You will form new teams to tackle different obstacles on board the Event Horizon. These teams can take any form and will be very situation dependant and always up to the players to decide.

Please indicate what type of role you would like to have. If there is a specific player that you would like to be teamed up with, please tell us by using the comment box when you book. We will try our best to accommodate both role and team preferences. 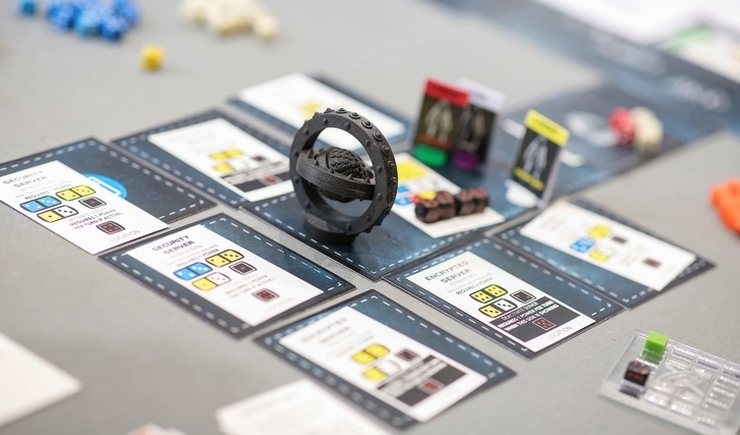